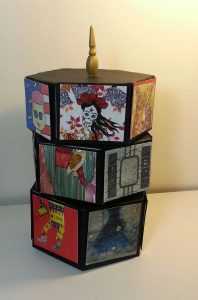 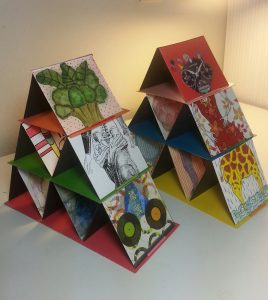 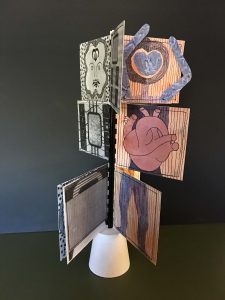 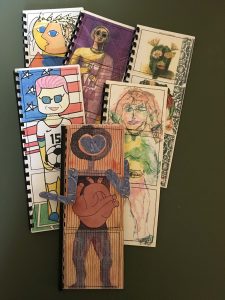 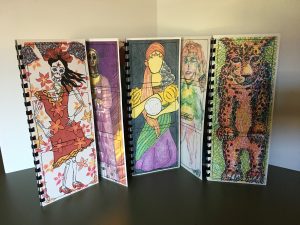 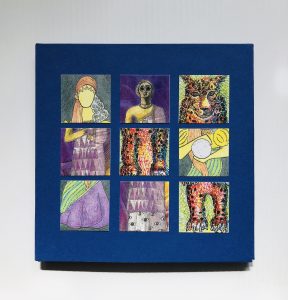 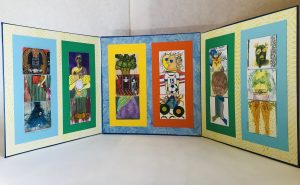 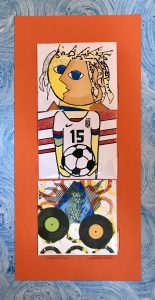 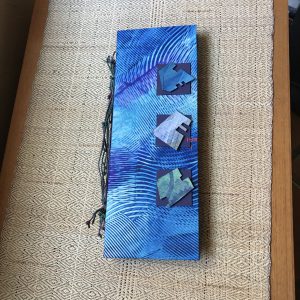 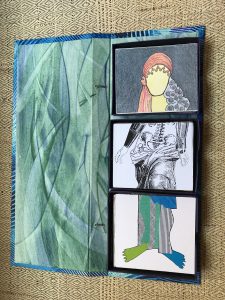 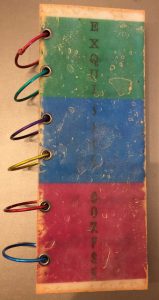 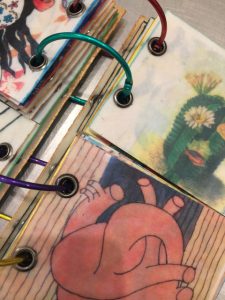 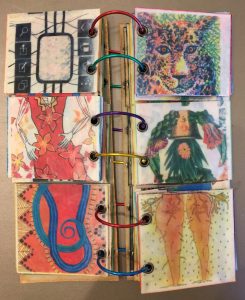 For the past 8 years I have made a doll each September to commemorate my birthday. When September 19 arrived last fall, I once again went to my studio full of anticipation about what the doll would become. I gathered stuff to make her – fabrics, art papers, paints and pens along with assorted yarns, ribbons, and buttons and do-dads. I started out by painting small pieces of canvas skin tones and bright designs that could become clothing or arms and legs. I had the intention to assemble the doll after lunch when the fabrics had dried. But my “vibe” had changed and I discovered that at there was no in doll in my consciousness.

I was disappointed but figured she would emerge later in the week. So I packed up all the pieces and stored “her” on the unfinished project shelf. I felt disappointed and knew that I “owed” myself a birthday doll if I was going to keep up the tradition!

For the next 3 or 4 months, I would occasionally return to the tray and fondle the pieces with the hope that on that day, the doll inside me would speak up and take form. The holidays came and went and one day I looked at all that stuff on the tray just waiting to become the doll and decided that the time had come! No more delays! I had to get the doll finished!

I began with the painted canvas drew a face on it and cut out her head. Immediately she developed a persona and became the centerpiece for the doll. I found the right yarns and fabrics in my “stash” and by the end of the day she had emerged fully and completely! 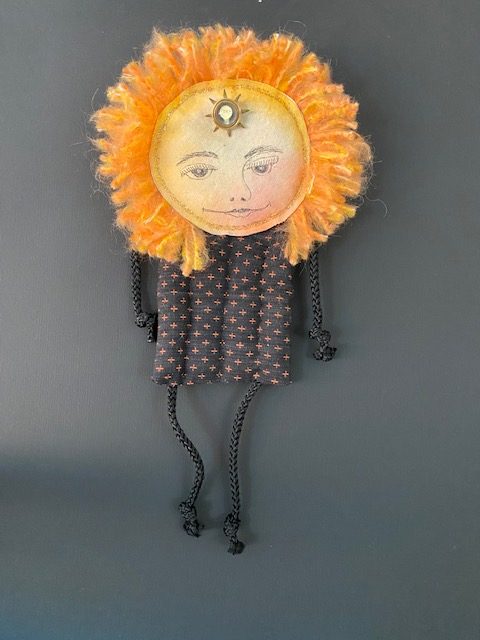 I’m describing this process to illustrate the point that creativity is not easy. Getting started on a project can take forever!! I find it difficult to work on something unless I have a vision or an idea that I can pursue with enthusiasm.

I think one reason why I have produced so little finished work these past few years is because I’m out of practice and have let my creative juices dry up. I haven’t pushed myself to enter shows, or take on projects unless there is a specific reason to do so.

The other element of art-making for me is recognizing that I must be more patient with myself. It’s harder to start an art project if you haven’t been to the art table in months. Daily cutting, pasting, painting, drawing, printing keep all these skills at the front of your brain – ready to call upon when a particular challenge comes along. I have not been a daily art maker.

Recently I’ve been journaling about my lack of art production. It’s clear to me from all this soul searching that I benefit when I have some form of art-making as a daily practice. It makes me happy and I look forward to seeing what I discover each day during that time at the art table. The more I practice my art, the more likely I am to start and finish projects.

The quarantine is helping! For the past month I’ve been showing up at the art table most days. And my life has been much more enjoyable. I’ve spent time drawing and painting the flowers in my yard. I’ve started up this blog again. I’m having fun in the kitchen trying out new ideas. It seems like l that my muse has come back to entertain me.

I’d be interested in hearing from you about how you are motivating yourself to be creative and nurturing your inner artist.

“Imagination should be allowed a certain amount of time to browse around.”
Thomas Merton