Some tasty food ideas for you….

In our home on Thanksgiving some form of orange always appears on the table or during the meal.  Usually there is a centerpiece made of yellow, orange and rust colored chrysanthemums.  And almost always there’s either a casserole or dessert made with some form of orange vegetable:  rutabaga, sweet potato, yam, butternut squash, carrot or pumpkin!

Rutabaga
My dad had a fondness for mashed and buttered rutabaga and he loved Mom’s pumpkin pie.  She always used the recipe on the Libby’s canned pumpkin label.  I like that recipe too, but I add more spice and bake it in a casserole dish instead of a pie shell.

Butternut Squash
I’ve always had a special  place in my heart for butternut squash.  I love it plain, or in soups.  One of my favorite salads is a combination of cooked butternut cubes marinated in a flavorful vinaigrette and tossed with fresh sliced strawberries just before serving!

Ruby Yams
In recent years I have discovered the ruby yam.  A quick and delicious way to fix it, is to peel and slice it lengthwise into 8 long wedges.  Toss it in a bowl with some good olive oil and sea salt.  Place on a foil-lined sheet and roast at 425 for 20-30 minutes or until it is cooked and slightly browned.  Let them cool and serve as an appetizer with a dipping sauce.  I like to use ranch dressing when I don’t have time to whip up a sauce.

This year our Thanksgiving meal included a yummy casserole made with mashed ruby yams and a pecan streusel topping.  You can serve it with the meal (use less sugar) or as a dessert or pie filling.Here’s the recipe.

Mix together and sprinkle over the top:
1/2 cup brown sugar
1/3 cup flour
1/3 cup melted butter
1 cup chopped pecans. (for more flavor, roast the pecans in the oven before)
Bake at 350 for 30-40 minutes until hot and browned.

I think you could substitute pumpkin, sweet potato or butternut squash for the yams in this casserole

Let me know of your success with any of these recipes.  Or if you have a special yellow veggie dish, send me the recipe.  I’d love to try it.

You can e-mail me at: 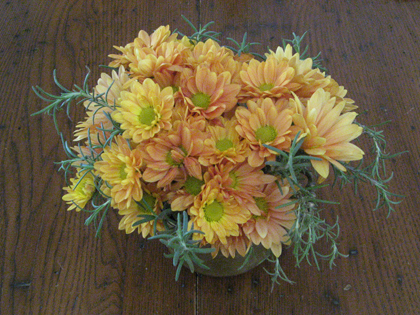 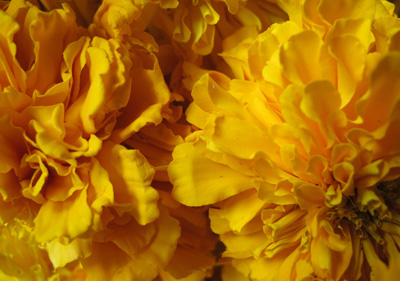 Two weeks ago we returned home from Oaxaca, Mexico. Marigolds are the keystone flower for Day of the Dead celebrations throughout the region.  They symbolize all that is supremely wonderful about this celebration.

I first encountered the Day of the Dead when I moved to Tucson in the mid 1990’s.  There is parade known as the “All Souls Procession” which takes place on the weekend of All Souls Day (November 2).  I learned that Dia de Los Muertos was a Mexican celebration of family members who had passed on.   It involves decoration of family graves with flowers, food and drink, home ofrendas (alters) with special foods, photos and mementos etc.  There are many family celebrations in honoring the memory of those who had passed.  It is their belief that these souls return for a short visit and it becomes an annual connection with loved ones no longer living.

Wow – there’s nothing in our culture that celebrates death in such a positive fashion. We began going to these processions and witnessed the positive ways death can be honored and celebrated.  We wanted to explore it even more which brought us to Oaxaca.  We spent a week there immersed in the art and craft of the Zapotec indigenous culture and their celebrations of Dia de los Muertos.  In the markets and villages and all around the Zocolo(city square) marigolds and celosia prevailed.  There were skulls and skeletons in all art forms – ceramic, wood, sugar, papier mache and more!  Special foods including delicious moles, beautiful formed breads and the most delicious tamales I’ve ever had, were essential components of family meals.  Music was everywhere – lots of bands with tubas and drums setting the pace for everyone.  Guitar maestros strummed at grave sites.  Costumes were amazing.  Many of the young people dressed up in elaborate fashion – often with skeleton faces but devils and scary creatures were everywhere.  We even saw Zapotec warriors wandering in the plaza as part of a big celebratory parade and a family dog with red devil ears!

We observed families dressing graves at three different local cemetaries.  People started arriving after 8 in the evening and by 10 pm it was almost impossible to move around the graveyards.  The graves were elaborately festooned with flowers, food, drink and photographs.  People were anticipating the return of the souls after midnight and some planned their vigil for a full 24 hours.

One night we joined in a dancing parade known as a “comparsa” in a small village about 30 minutes outside Oaxaca City.  This was a family parade with almost the whole town dancing to the music as they traversed the parade route.  There were two starting locations and two little bands – each on a different side of the village.  They came together and then danced their way to a large plaza where the festivities continued.

On our last night we went to a traditional Zapotec family celebration and were greeted by a 15 piece band. That was the background for dancing and eating.  The eating began with a mescal toast (like high octane fuel) followed by wonderful tamales, a panetone-like egg bread, and a cup of delicious Mexican hot chocolate.  After much dancing and fireworks it was over and time to return home.

While our culture seems to focus on grief, sadness and loss, I see these wonderful Oaxacans celebrating with gratitude and joy.  They honor the ones who have died and remember them with love and energy – preparing their favorite foods, creating ofrendas  as they believe deeply that souls return each year on this special occasion.

I shall plant marigolds in my garden so that they are in full bloom when the end of October arrives.  Their bright colors will continue to remind me of a joyous way to celebrate my dead relatives and hopefully their souls will come back to our home on All Souls Day to enjoy a little celebration with the living.

Note:  You can view our photographs at:

www.eddddean.zenfolio.com   Scroll through the programs and look for Oaxaca, 2012

If this trip is one you think you would enjoy, visit www.crizmac.com.  Stevie Mack, the owner, has been taking people to Day of the Dead celebrations for over 17 years.  We think she does a fabulous job.