One winter Saturday I took on a personal challenge to make a book in one day informed by the sculptural qualities of Daniel Essig’s work.  I wanted to submit the book for the Poetry Center show “Beyond Word and Image”.

Before starting, I “juiced” my muse by looking at artists books and setting aside some of my favorite texts and looking again at Dan’s work.  I began by painting two large sheets of Stonehenge and folding them into pages.  I reread the texts I had set aside to see if there was a fit.  I found that Rumi”s “Guest House was coming to life.

The individual folios became rooms.  I created openings to suggest  doorways and windows so one could travel through the house.  After much experimentation, I found a writing style for the poetry. But I was not finished.  The work needed a “wow” in the form of some sculptural element. That is part of the charm of Daniel’s work. 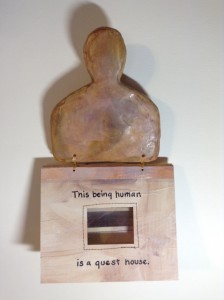 I stepped away from the piece and several days later realized that the book should be hung from something!  I could use a human form since the text refers to our humanness being a guest house.  I decided to suspend the book from an upper torso shape which I constructed using a foam-core base wrapped with plaster bandage.  This provided an opportunity to implant a hanger so the book can be displayed on the wall.

I painted the form with acrylic paint and applied a encaustic coating.  The final step was to attach the book to the form using artificial sinew.

The book took more than a day but less than a week to complete!  And it was not chosen to be in the show!  Oh well, that disappointment is just a part of being a human guest house.  I subsequently found out that the jurors were more focused on the graphic elements of the work submitted and in choosing a cohesive show, had eliminated some unique pieces that embodied innovative structures.